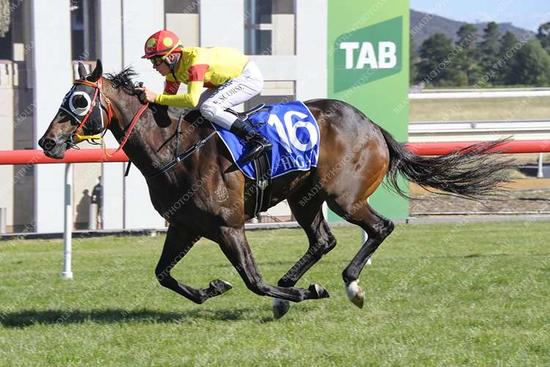 Croix De Vie has landed his third win in the rich Canberra Federal which is great initiative the Canberra Race Club and is sponsored by TAB.

The race held at Canberra every meeting gives top three Canberra trained horses past the post the chance to win bonuses valued at $6k for first, 3k for second and 1k for third.

Handing them almost an exact repeat of his win two starts prior, Croix De Vie was able to settle back and race wide as he loves to do. Scorse let him cruise into the race under a hold and at the top of the lane ambled alongside the tiring leaders. Patty slipped him more rein and he responded boldly coming away over the concluding stages to win by a length on Balansa ($15) with Volpe ($5.50) a nose away in third.

The win took the son of Beneteau past the $100,000 mark and was his sixth success from 28 starts.

If you missed the race, click on the link below and watch the JJR Yellow + Red towards the rear early.