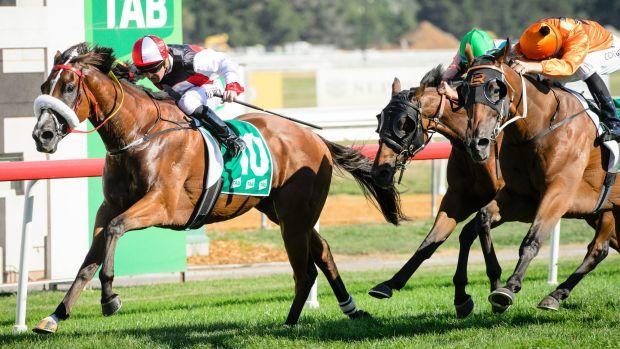 Almost Court has lived up to his name and led from start to finish to win the $130,000 Canberra Cup (2000 metres), sparking wild scenes from the local owners on Sunday.

The lightly raced New Zealand import produced a bold front-running performance and sent many big guns packing as Barbara and Paul saluted for their second Cup success following Fill The Page in 2012.

Christian Reith took Almost Court ($4.80) to the front and didn’t look back as he held on to claim the $200,000 Listed Canberra Cup (2000m) on Sunday. The win was his sine was the five-year-old gelding’s sixth and biggest win since crossing the Tasman to join Joseph and Jones’s Canberra stable.

While Almost Court tired in the race’s final stages, he dug in to hold off Admiral Jello ($6) by a long head with Get On The Grange ($12) a long neck away third.

“He probably went a little bit keen down the back straight but (Reith) got him back under him at the 1000 till the 400 metres and he was able to kick at the top of the straight,” Jones said.

After Court agreed to share the ownership with Joseph and Jones, the trainers syndicated Almost Court to a group of long-term clients and first-time owners.

“There’s a crew of 10 blokes who have their first horse and they think the game’s that easy,” Jones said.

The country Cups circuit beckons for Almost Court, with Albury and Wagga Wagga in sight.